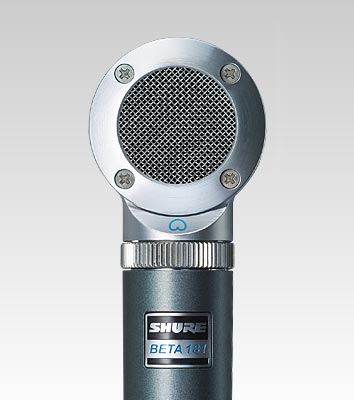 The Shure BETA 181 is an ultra-compact, small-diaphragm side-address condenser microphone, designed for discreet placement and control in live and studio environments. Featuring interchangeable cardioid, supercardioid, omnidirectional and bidirectional capsule options for superior versatility, the small diaphragm design provides superior audio with consistent, textbook polar responses in a form factor small enough to get close to the source in the tightest conditions.

Listen in the Shure Mic Lab

- The history behind modern microphones, the fundamental science behind them, and how to apply best practices across a wide range of applications.

- The basics of sound design and how it can be used to enhance the story telling as well as the drive of a film.

- Learn about techniques used, the various elements in sound for a mix and also how it impacts the scene psychologically.

- The art of mixing for visuals. The concept of blending elements to create a realistic sequence or a design sequence to enhance the story telling.

Join Robert Scovill as he unveils the unrivaled flexibility and capabilities of the S6L Unified Platform. This massive extension of the S6L line of products offers a groundbreaking approach to digital console design while offering previously unrealized integration capabilities. The Unified Platform approach stands to evolve the manufacturing industry and redefine what is possible for today’s integrators and live sound mixers.

Where Did 0db Go?: A Study in Optimizing Gain Structure for Both Live Sound and Recording

Today’s digital consoles and processors present significant challenges for simultaneously optimizing gain structure for the event and for multi-track recording and virtual sound check. Join Robert Scovill for a best practices approach to achieving great sound quality from your console and processing through easy to apply gain structure concepts and techniques.

The Devil Is In The Details: Techniques for Manually Delay Compensating Digital Consoles

Robert is a 35-year veteran of professional concert sound and recording and has mixed over 3500 events in his career. His engineering and production talents have been enlisted by a veritable ‘Who’s Who’ of marquee music acts including Tom Petty & The Heartbreakers, Matchbox Twenty, Jackson Browne, Rush, Def Leppard, Prince and many others. Scovill’s body of live sound and recording work has garnered numerous industry accolades including 6 TEC Awards for technical and creative achievement in sound reinforcement. Robert is a 6 time nominee, 3 time winner of the PLSN Parnelli Award for live sound engineer of the year and has been a multi-year nominee for Mobile Production’s “Top Dog” Award along with being an inaugural nominee for the highly coveted Pensado Award for live sound excellence. In 2018 he was awarded the prestigious Lydmannen Award by the Nordic Sound Symposium for outstanding presentations on professional audio.

As the owner of Eldon’s Boy Productions Inc. and MusiCanvas Recorders in Scottsdale, AZ, he offers full service mixing facility and mobile recording services. Robert is also a highly sought after consultant advising venues, artists, sound companies and the house of worship market on everything from technology, workflows and acoustics for their companies and events.

As an educator, Robert has lectured throughout the world on concert sound and recording practices at seminars and trade shows, and is a regular contributor to numerous industry publications, blog sites and YouTube video series.

In 2006 Robert served as guest speaker delivering the keynote address for the Annual AES conference in San Francisco and has gone on to be the keynote speaker and presenter for many professional audio organizations.

Robert currently holds the position of Senior Specialist for live sound and recording products for Avid Technologies and serves as a principle designer and contributor for their VENUE line of live sound consoles. Scovill is commonly regarded as the pioneer of virtual sound check and mulita-track archiving workflows for live sound.